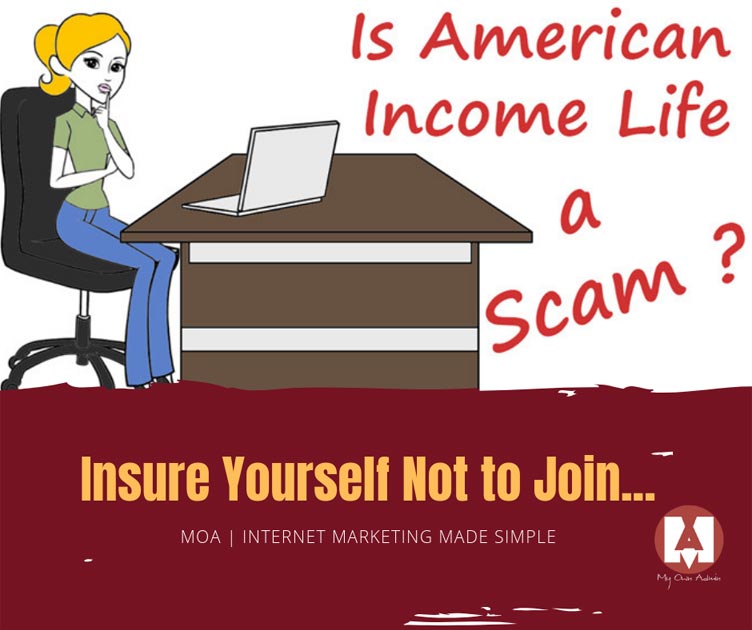 Welcome to my Is American Income Life a Scam Review.

Hi, It’s great that you are taking the time and effort to do a research study prior to purchasing or subscribing into any “apparently great” product.

Just a heads up, American Income Life (AIL) is basically an insurance company that offers individuals the prospect of joining and making huge rewards from it. The approach or model they make use of is that of employing new staff. This has caused more people to question if it is a scam or not. This AIL review will discuss certain aspects of it as well as find out if it is a scam.

What Is Multi-Level Marketing?

While we have classed AIL as an MLM company, it is important that we understand what MLM is about and how it relates to American Income Life.

As the name implies, Multi-Level Marketing is marketing structure with multiple compensation levels. This means that as an agent or worker, you are compensated for bringing new recruits. You earn commission from the recruits of your recruits. While most people would think of MLM as a good business opportunity, they would find it disheartening to know that from the onset, they do not make enough money.

The recruitment process for this supposed company is well structured to ensure that new recruits never suspect a thing. You will be called up for an interview, you will be required to sign the necessary documents as well as attend training like every job you apply for.

During the interview process, you would feel like you’ve landed that dream job only to get to the training and hear that there is no salary structure. The amount of money you make each month will depend on the commission you are able to get from selling and recruiting new agents. This means that you are not an employee, you are simply an independent contractor that earns a commission from selling and recruiting new agents.

This is quite depressing as there are false advertisements all over the place stating the benefits agents stand to gain if they join the company. These false benefits are used to woo agents into the company. The money you earn working for American Income Life entirely depends on your ability to convince people to either buy insurance or recruit new agents.

Along the time of the interview, agents would be told everything they would want to hear about their dream jobs. It has been revealed that during the training process, these new recruits would be told that they can make over six (6) figures in less than a year. They would promise them that in less than ten years, they can retire with more than enough money to travel to any destination of their choice.

Is American income life insurance legitimate? I really don’t think so, it has been revealed that those who make it big in this company are great liars. People with convincing skills are able to make huge money from telling others the fake and unrealistic benefits they were promised when they joined.

This company works in such a way that if agents are not able to convince others to either buy insurance or become recruits, they do not make any money at the end of the month. This means that even after putting in great work, recruits can still earn nothing at the end of the month. Managers would encourage these new recruits to focus more on getting new recruits than on selling the acclaimed insurance. 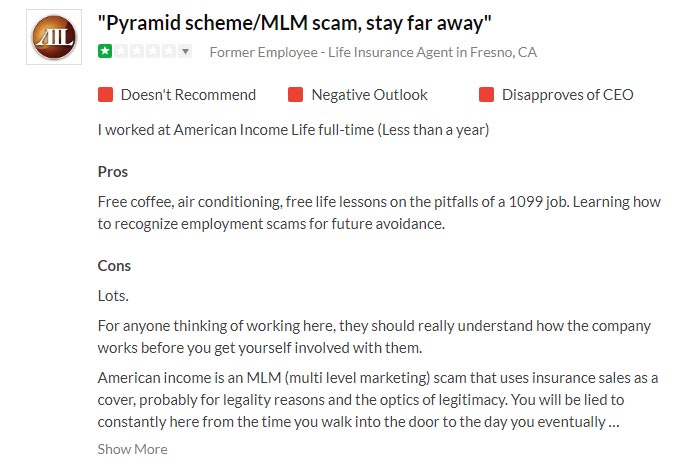 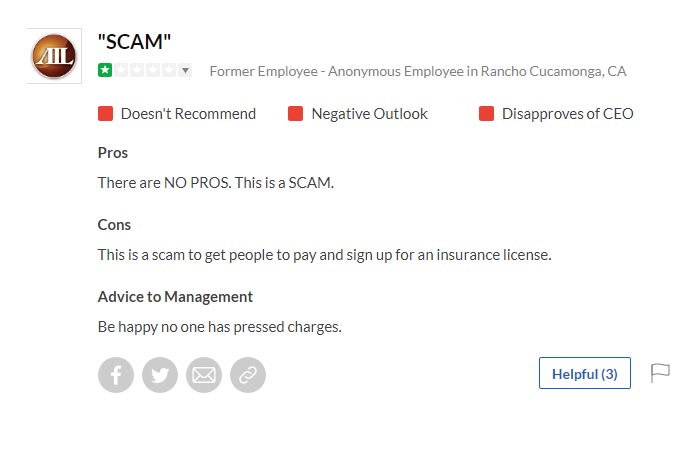 Why American Income Life Is Not For You

Basically, the sales aspect of the company is simply a cover of the real pyramid scheme that is in place. Although you will be trained in their various insurance products but in less than no time, you will discover that their plans are quite inferior if compared to others. Meanwhile, you will be required to walk up to strangers and try as hard as possible to convince them to either purchase the insurance or become an agent. This means that in a month, you can earn nothing if no listener is receptive.

Also, new recruits are given fake titles that would boost their self-esteem and make them feel like integral members of the company. During the training, a test would be carried out. For this test, new recruits would be required to pay $40. One frustrating fact is that recruits often times fail this test countless times. This means that they would have to repeatedly pay $40 for each test. During the training, very gifted individuals would be hired to convince new recruits that they are at the right place. Before new recruits are sent to the field, they are motivated and encouraged that they could earn a huge commission as they try to convince people to become members.

Although most people claim to have made money from this company, the majority of people have lost not only their money but also their time. Several recruits have not been able to earn any commission as more people are aware of their tricks.

There are several factors that make AIL a scam. Some of these factors include;

Hope you found my article useful and if you have something else to add to my American Income Life Scam Review please drop me a line on the comment section below.

6 thoughts on “Is American Income Life a Scam”