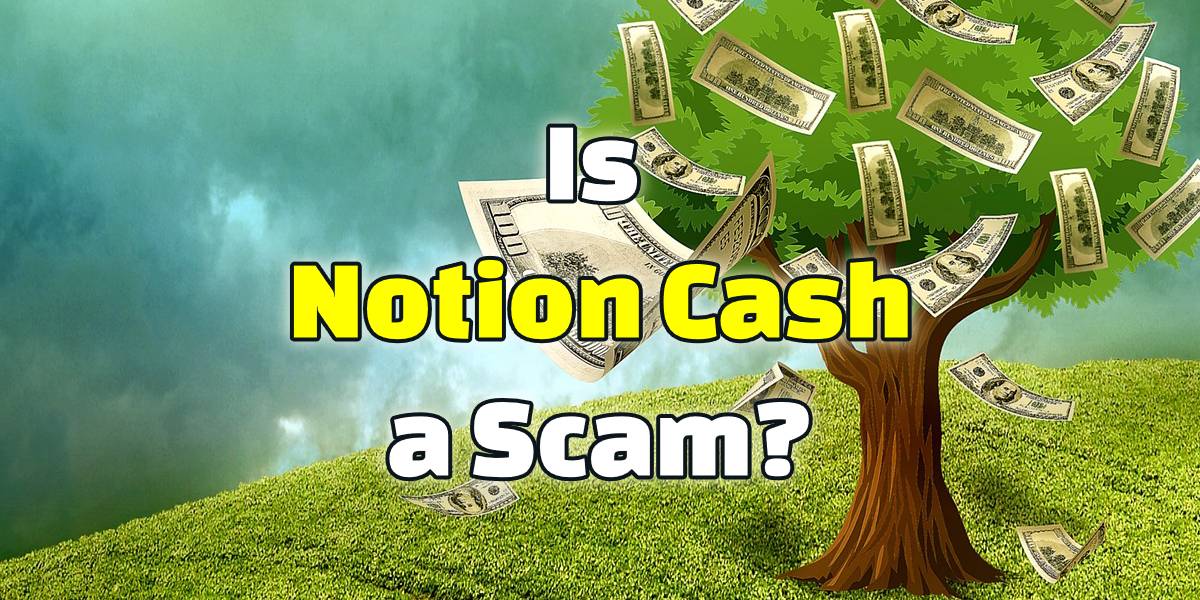 Is Notion Cash a scam? There’s a lot of make money online opportunities out there, and a large proportion of these are so-called get-rich-quick money schemes. While I’m a fan of the thought that hard work beats the rat race, sometimes I catch myself thinking about these get-rich-quick schemes.

One of those schemes which particularly caught my attention is Notion Cash. I’m not the type to delve into something without getting background information about it first. I did some digging around Notion Cash. The website looks professionally made and appealing to the eyes. “It looks legit”, or so I thought.

It turns out, Notion Cash could possibly be a scam! And a scam that takes advantage of your personal data for that matter! And it’s not just that, though. Later on, I will give you more reasons to convince you to stay away from Notion Cash as much as possible.

Curious? Let me now take you on a tour all about Notion Cash.

Quick Navigation hide
1 Notion Cash Review
2 How Does Notion Cash Work?
3 Reasons to Stay Away From Notion Cash
3.1 Undisclosed Identity of Owner
3.2 Inconsistencies with Dates
3.3 Sells Your Information
3.4 Fake Testimonials
3.5 Does Not Pay at All
3.6 Similar to Notorious Scams
4 What I Like About Notion Cash
5 My Final Conclusion! Is Notion Cash a Scam?

What is Notion Cash?

Notion Cash is a website in which you can invite other people to join the platform as well for you to earn cash. You are also given the option to complete tasks and get paid for each task you complete.

There is no disclosed information on who’s the owner of Notion Cash, though. On their website, you’ll discover that as of now they already have at least 185,000 members benefiting from this platform and had paid out almost $4.2 million. Being 3 years in business, they have already accomplished a lot and let me give them an applause for that.

Is Notion Cash a scam? We’ll go more over that later on. For now, let us understand how this rewards platform works from the inside in the first place before we jump to conclusions.

How Does Notion Cash Work?

To gain access to Notion Cash, you would first have to sign up on their website. You don’t have to pay for any sign up fees and stupid recurring monthly fees, because that’s right, you can use Notion Cash for free. In fact, they would even pay you $25 just for signing up.

Once you are within the platform itself, there are a lot of options for you to earn money. One of those options is to refer people to sign up to Notion Cash, as well. You will be given your own referral code which you’ll use to invite your friends and family. When people sign up to Notion Cash with the use of your code, it says you will earn $15.

Notion Cash also encourages you to use your influence. So if you are the type who’s influential on social media, you can simply post the code on your social media accounts and let your followers do their job.

Other tasks, too, will have you install and test applications on your phone. You will also be urged to complete surveys, and other tasks from their partners that Notion Cash promotes. It is said you can earn up to $50 for each task you complete.

Keep on working on these tasks and referring people until you have reached the cash out threshold of $250. Only then can you supposedly cash out your money through PayPal, Bitcoin, CashApp, and Wire Transfer.

All of this seems to be the perfect way to earn money, is it? All it takes is to refer people and complete simple tasks on a daily basis. Furthermore, you can easily make up to $200 per hour if you’re lucky! Anybody hearing all of these will definitely be down for Notion Cash – but I’m already telling you – DON’T.

Is Notion Cash a scam? It most likely is. But of course, I won’t be running around and go on babbling that it’s a scam without solid and hard evidence. Fortunately, I dug up some dirt on Notion Cash and let me tell you all about in the next section below.

Reasons to Stay Away From Notion Cash

One of the reasons why I’m making a big deal out of this is because I think it’s fairly important to know more about the business by first knowing who the owner is. Of course, by knowing the owner, we get to have an idea whether it’s a scam or not through his previous business engagements. Seeing how they don’t disclose the identity of the owner, it’s really hard to determine.

If Notion Cash works in the first place, shouldn’t the owner be proud to show his face and identity so that he can be recognized by people? I think that’s kind of transparent already. There’s no name, no face, and nothing to help us know who he really is.

The address could be of help, though. However, when I searched the address on Google, it turns out this is only an address in which you can rent a virtual office address. Of course, there’s nothing wrong with that. However, then again, this means you’d have no leads on finding the owner of Notion Cash.

Notion Cash states that they have only been 3 years in business. But after some digging, I discovered this website has only been around since March of 2019. Exactly after 3 months and 1 week by the time this review had been posted.

Yes, we get it. Do simple tasks in exchange for cash. But get this, before your payment pushes through and the money in your Notion Cash account increases, you would first have to enter your phone number. Okay… what is that for?

I always thought about how it’s possible for Notion Cash to make money and pay people for simply using their website to refer people, do tasks, and get paid. All of this for free. Apparently, they sell your information to third parties to make money from you.

Of course, for them, it could be as simple as leeching off money. However, take note, that’s your information we’re talking about, and it’s just casually sold to different parts of the Internet. Who knows what foul things can be done with your information?

The best-case scenario is that you’ll be bombarded with spam and sales calls from Notion Cash’s partners offering similar services. As for the worst-case scenario, let me leave it up for you to think.

Another thing, Notion Cash will instruct you to disable your VPN and Adblocker. Honestly, this should be enough to set your alarms off.

When you visit the website, there’s this section in which you can view testimonials of Notion Cash’s members. The idea here is to give you the motivation that you too can make money by using their website. It gives you the hope that you can do the same.

Sorry to break it up to you, but these testimonials are fake. These faces looked a bit familiar to me, that’s why I searched them up. It so turns out these members of Notion Cash are only paid actors from Fiverr. He’s not really earning easy money, rather just earning at least $5 for saying a few positive and made up things about Notion Cash to deceive you.

With that being said, it only indicates how useless this website really is. Why bother hiring a paid actor when it works in the first place? Oh right, it doesn’t! Sorry about that.

Does Not Pay at All

This doesn’t even surprise me. I mean, have you ever seen a legitimate website pay you $25 just for signing up? Plus, $15 for each referral. You even get paid for doing simple tasks. On top of all that, you’re using the website for free! Is this some kind of charity work or what? I don’t think so!

You can refer people all you like and do tasks to your heart’s desire. Yes, you’ll see the numbers on your dashboard increase and when you reach the $250 cash out threshold, you will only discover that you can’t cash out this amount! Congratulations, you have just wasted your precious time.

Notion Cash does not have any intention to pay you. They’re only doing all this so they can sell your information and they could earn their commission from partners when you finish doing all those tasks.

I knew it. When I first had a peak on this website, it gave off an odd sense of familiarity. I had reviewed rewards platform before like Viral Dollars and Kids Earn Cash, and to me, Notion Cash is very similar to these!

In the cases of these websites, all of the homepage layouts are professionally made. All of them gives $25 bonus for those who sign up. The commission for the referral program ranges from $10-$15. On top of that, there are also a list of tasks you can do to earn money! Is it all a coincidence? I think not!

Get this, I exposed Viral Dollars and Kids Earn Cash! These two are scams and you should stay away from these! Honestly, isn’t this enough of a reason for me to assume Notion Cash is within the same network as these scams?

It’s not just that. When I saw the testimonials, these are for Influencer Club, not for Notion Cash. The juice here is that Influencer Club is an exposed scam! This gives me two impressions. First, the creator of Notion Cash is lazy as crap. Second, these two are linked due to being created by the same group of people.

And if that’s not enough, visit InfluencerClub.co right now. See that? It redirects to Notion Cash. Linked. Just like that. Do I need to say more?

You can use it for free. That’s great. But honestly, it’s just a waste of time and effort. You will receive nothing in return when you sign up for Notion Cash.

My Final Conclusion! Is Notion Cash a Scam?

After further research and some thinking, all of the red flags are too strong and significant in number that it can’t simply be ignored. Taking all of these into account, I conclude that Notion Cash is a scam.

It’s linked to a network of scams, and if that doesn’t set off all your alarms just yet, the testimonials are fake so it’s basically useless, and it sells your information to third parties.

Notion Cash is also not transparent by not disclosing the identity of the owner and all the inconsistencies. I bet they are hiding something. Plus, they do not have the intention of paying you at all.

They just want to make money off of you by selling your information and have you do all these tasks so they could earn their own commissions without giving back a small proportion to you.

If you are looking for a real make money online opportunity, check out my Wealthy Affiliate review!